The exhibition touches on questions about the turning point between the private family and the large flow of information with news and advertising. 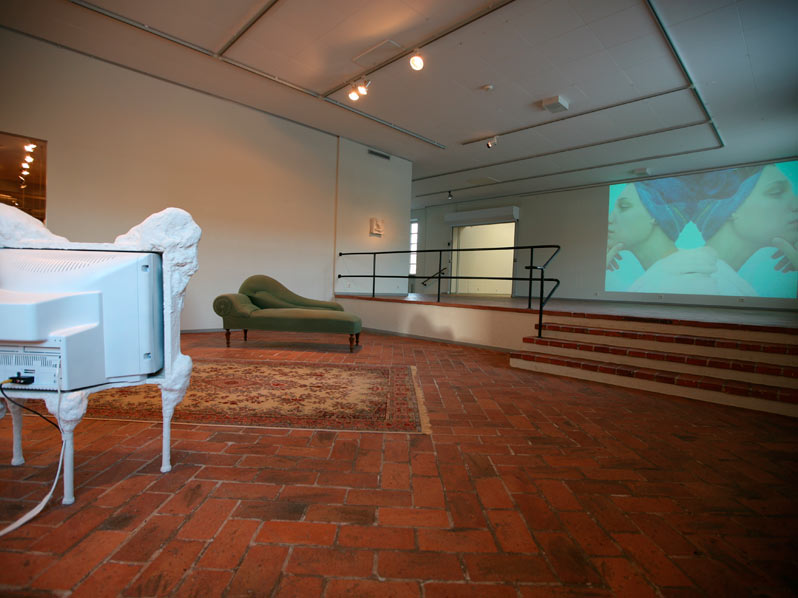 We sit at home on our TV sofas. News flows by when we distractedly think of something else. News as information but also entertainment. Nicely packaged as a commodity. The flow seems to envelop us and form an elastic putty between us, an adhesive that holds and holds apart. FamiliarLife is an exhibition about the daily flow of media, advertising and news that breaks into our homes and private spheres. It is about the relationship between the individual and the collective and about the framework we give ourselves and each other. How we decorate and ornament to fit our lives into each other and increase our self-esteem. That’s how it rubs and skews anyway. We do not always fit into the framework. We are too big and too small, too similar and too different. The news flow becomes an ornament that winds around us, something to hold on to and relate to. It creates security but hides and worries. When does the frame take over the content? When does an embrace turn into suffocation, holding on? Maybe the media works as a putty between us. As an enveloping mass – a matrix. But the form takes over the content and what do we really see when the news flutters past on our TV screens? 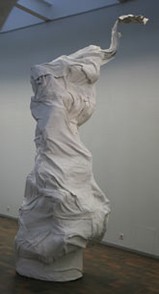 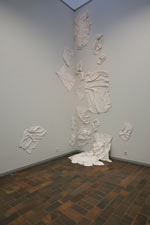 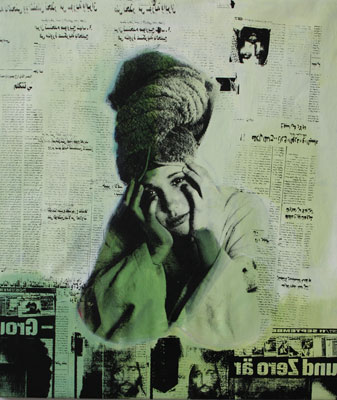 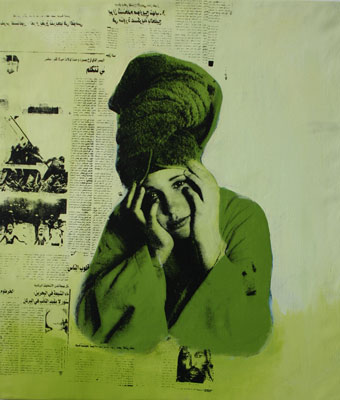 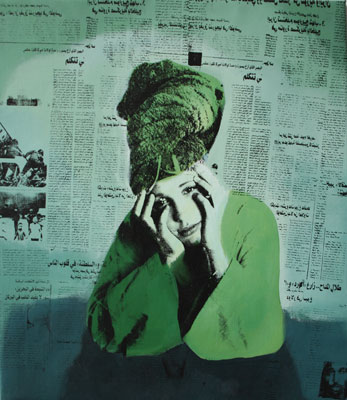 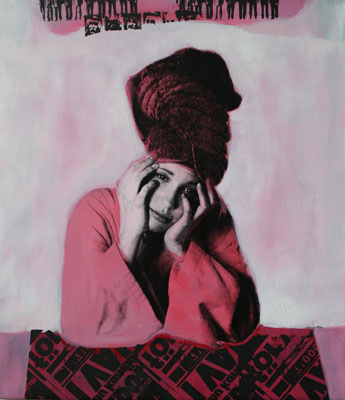 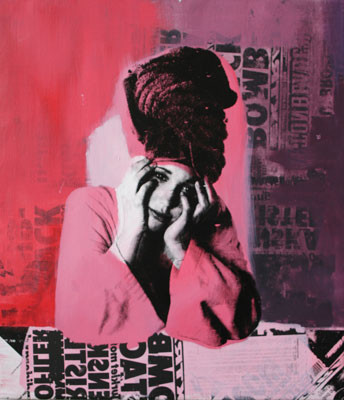 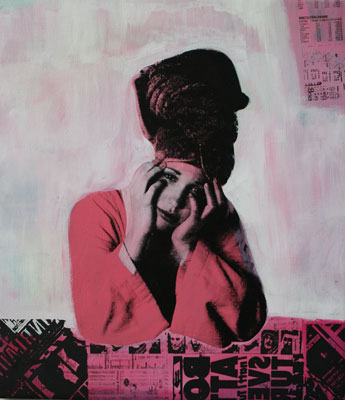 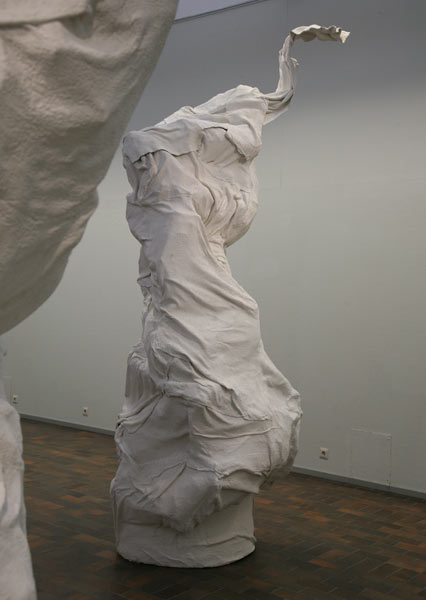 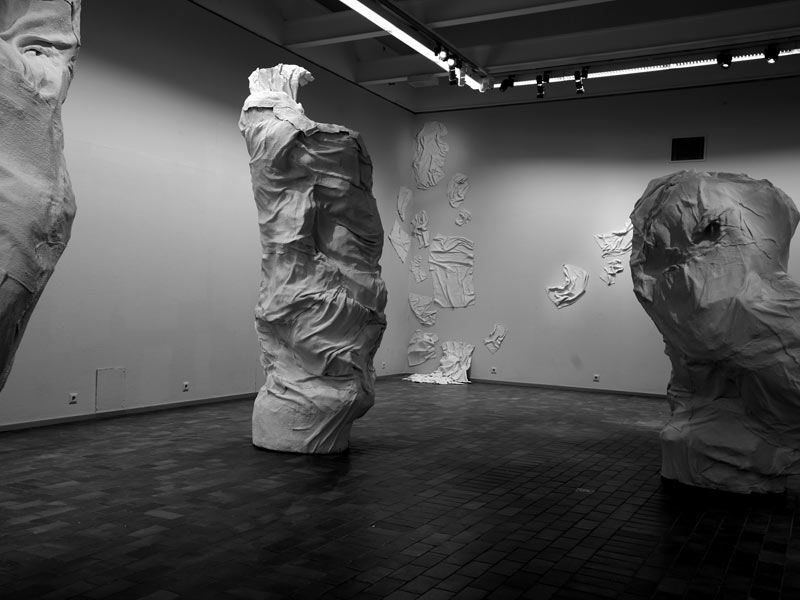 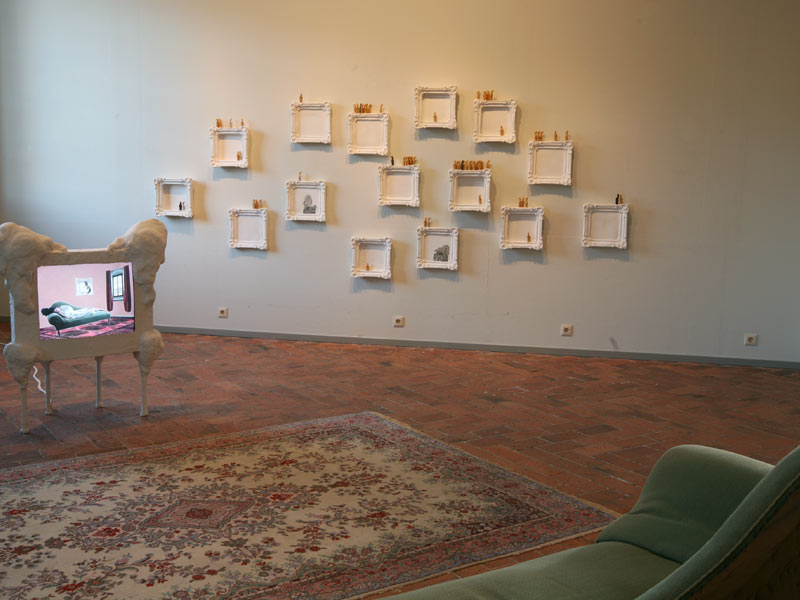 A TV embedded in ornaments shows the animation FamiliarNews. On the wall “Frames” 15 plaster frames with wax and bronze figures and the “Framed” doll in plaster that reappears in the animation. 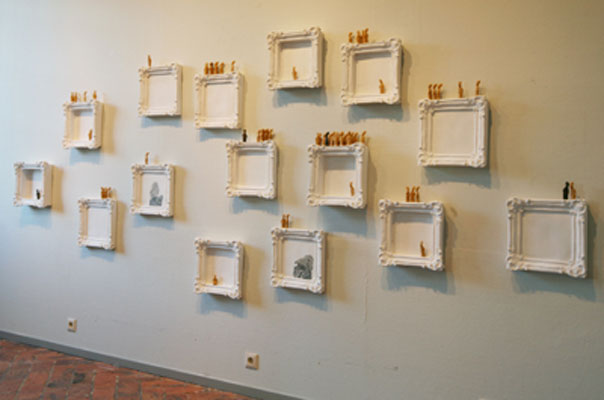 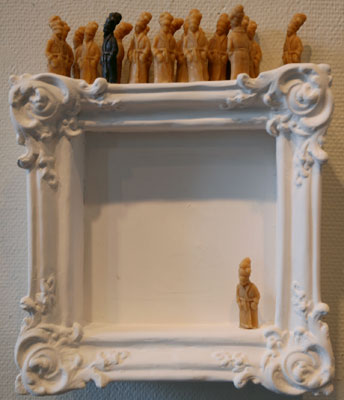 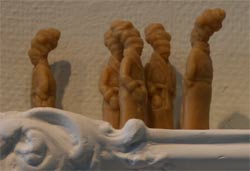 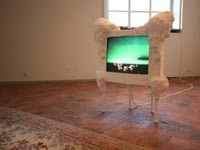 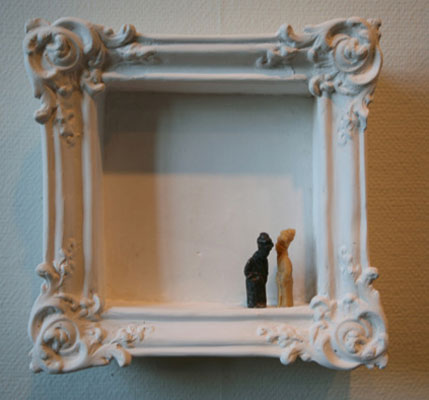 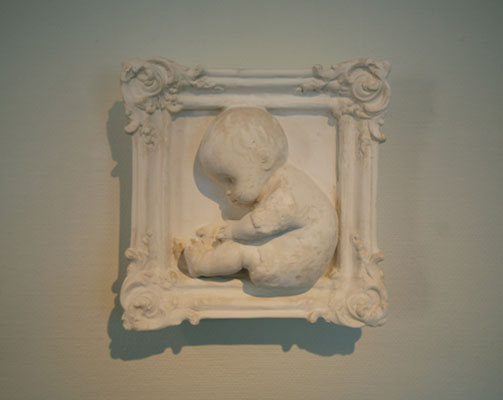 INTRODUCTION Text from the catalogue

The divan and the turban

My first encounter with Katarina Jönsson’s family theme was in an exhibition at Gävle Art Center, which was entitled Family. The year was 2003 and the exhibition touched on questions about the family or, perhaps rather, the image of the family; its inner life and outer facade and how the formation of our identity is so strongly influenced by the family’s social context. A central work was a family portrait of the influential Garberg family in Gävle’s history, which was borrowed from the County Museum. The painting had become of great importance to Katarina Jönsson after her move to the city and the Art School, when she, as a newcomer to Gävlebo, realized that the people in the museum’s painting were her relatives. The insight raised the questions about the family structure and what significance this has for our development that Katarina Jönsson has lived on ever since. One of the exhibition’s strongest works in my opinion was a collection of dried banana peels, which the artist in the role of a teenage parent collected for a year from his diligent banana-eating son. The work was presented with the banana peel irregularly strung on wires strung across the wall, and the installation became both a poetic and powerful image of both maternal care and human social behavior, alternately together in groups or individually solitaire. At a distance, the black, dried shrunken shells were a homogeneous flock. Upon closer inspection, their individual characteristics and aging process emerged. In the exhibition there was also a divan, whose green hue was almost identical to the mold in the photographs of fruit that surrounded the divan in the room. The connection between this charged piece of furniture, so intimately associated with Freud and psychoanalysis, and family themes was, of course, no coincidence. For me as an observer and interpreter, the divan has become a key to Katarina Jönsson’s recurring questions about the small child and what experiences shape us as human beings, from the first moment.

When Katarina Jönsson now opens the gates for the exhibition Familiar Life at the County Museum, she has left the history of the personal family and moved into the media turbulence and information flow of the global contemporary. The questions about the family and its interplay between the individual and the collective have now become more about the individual’s relationship to the present and the world around him. How can we poor people accommodate everything we are flooded with? The green divan is back in place. The video Familiar News begins as a stylized news broadcast. In the foreground is the news-reading woman with an absent expression. Her attire is unexpected; bathrobe and towel turban, as if she had just taken a bath. Hardly a uniform we associate with the newscasters’ otherwise correct dress code and an effective way of highlighting the woman’s lack of mental presence and desire to be elsewhere. Subtitles roll across the frame that provide information about a seemingly endless enumeration of wars in the world. In the background a moving mosaic of the world press’ spectacular testimonies from the horrors of war. The woman becomes increasingly worried and soon we are in a completely different room, furnished with only a divan on a Persian rug. On the divan, the woman lies in her bathrobe and turban. She turns and twists in agony over the state of time, but perhaps just as much over her own? On the wall hangs an ornamented frame in which an infant leans around, clearly bothered and inhibited in his freedom of movement. Outside the room window, the view consists of the recurring sequences from the TV stations’ aestheticized elements from the world’s ongoing war zones. The contrast between the turbulence and chaos outside the outside world and the stagnant room’s apparent security with the divan in the center makes it impossible not to think of Freud’s own analysis diva, who was dressed in Persian rugs to make the analyst feel safe and taken care of. The author Aris Fioretos has associated with Freud’s divan (DN, 7 September 2006): In psychoanalysis, the patient is the sighted at the window, the analyst the blind in the interior. But only the blind can tell what the passing views mean and what movie the seer really sees. In the meeting with Katarina Jönsson’s work, it is challenging to take on the role of the blind analyst.

Another of her companions, in addition to the divan, is the towel turban that has appeared in previous works, including in the photo animation Anna min Anna (2003). A beautiful, formal composition game with mirrored turbaned profiles that slowly merge and separate in a dreamlike design. It is not entirely irrelevant that the title of the work is Anna, Katarina Jönsson’s daughter, who also lent herself to the design of the animation. Here, too, the thoughts move in the direction of the nooks and crannies of the subconscious and the Rorschach test’s analysis of the viewer’s interpretation of the mirror plumbers’ mirror images In the exhibition at the County Museum, the towel turbans have left both the image surface and the head and in a more dissolved form moved out into the room. The scale is large. The surface layer reports how they are built up; in layer upon layer, newspaper by newspaper, performed in a Mongolian papier-mâché technique with chalk, which in this context is not only an artistic technique but an essential part of the work’s ideological content. The turban sculptures are made of newsprint from all the newspapers in the world, saved from the library’s extensive newspaper recycling. The sculptures are thus literally saturated with information that has passed the consciousness of the people of Gävle. And at this thought, it feels as if I suddenly understand the secret of the turbans; that in some sense they become a kind of least common denominator. They unite and gather, not just curls. Because if there is anything in our signaling system that so clearly marks our identity, religious or cultural affiliation, it is the headdress. For me, the turban sculptures with their anonymous textile expression become universal, a concentrate of the exhibition’s consideration of the daily news flow – in the turbans the turbulence of time gathers.

The different influences in Katarina Jönsson’s visual world that I have chosen to do, summarize an artistry that constantly moves between different levels and expressions. Katarina Jönsson is a versatile artist. She moves as comfortably in an analog as digital image world. She explores the possibilities of social sculpture with the same burning curiosity that she engages in close combat with new materials or the mysteries of concrete sculpture. She listens to the present and follows her own path sensitively and purposefully. Katarina Jönsson opens doors that I feel like opening. Not infrequently she makes a divan available. It may be needed more than ever.